Home WINE OF THE WORLDCanada
Showing 1 - 3 of 3 items 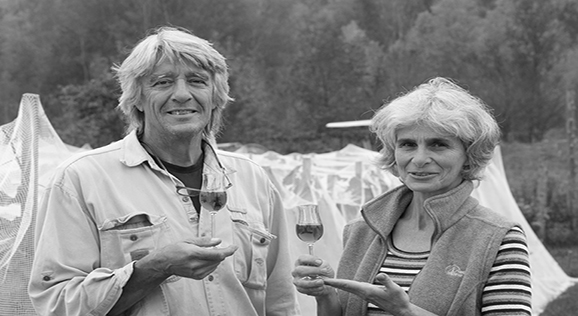 It is in Frelighsburg, on one of Quebec’s oldest orchards, that Louise Dupuis and Christian Barthomeuf
took the first steps back in 2002 that would bring about the creation of Clos Saragnat. The orchard and now vineyard occupy an area 35 hectares
at an altitude of 220 meters on the south flank of Mount Pinacle; a sentinel of the Appalachian mountain chain, located a mere mile from the Vermont (U.S.A) border,
on the 45th parallel, hence benefitting from the best possible exposure for growing fruit.
“The challenge we faced with this undertaking was considerable, given that, from the get-go,
we knew we wanted to create high-end products worthy of the international stage without giving in to compromise.
That’s to say we sought to work with the fruit and fruit alone; without additives, sugar or extenders;
without product enhancement, say with alcohol; nor artificial tinkering, say by adding colour.”

The land itself had been left to its own demise over a period of many years;
allowing for something of a head start when considering an organic approach.
It then followed that the various varieties of fruit, be they apples or grapes, that we introduced to the land, had to be carefully chosen.
They needed to be disease resistant whilst still offering the necessary palatable qualities sought in view of later transformation.

Many indigenous plants had re-established themselves over time and were kept as found so as to maintain and enhance bio-diversity.
“Any other changes would only be made slowly, as we came to gain both knowledge and understanding of our new environment.”

Clos Saragnat is a research center specifically geared towards viti-(vines) and vini-(wine) cultural and fruit-based wine-making development.
Hoping to leave its mark on the Quebec landscape of wine-making craftsmanship based on organically home-grown produce.

Christian is considered a pioneer of modern viticulture in Quebec. In 1980, he planted the first vineyard to be established in Dunham,
Le Domaine des Côtes d’Ardoise, now the heartland of the Quebec wine route. While there, he created the very first ice cider in 1989.

He would later do the same in Sutton with Chapelle Ste-Agnès, and finally, in 2002, he brought his work home with Clos Saragnat.

Louise, Christian’s partner in crime, has been lead-hand in vineyard development since the implementation of Chapelle Ste-Agnès
where she led the way for three years. Louise now furthers her knowledge at Clos Saragnat.